Over the past weeks me and Jackson have been in contact with an animation team from SAE Brisbane in hopes to create music for an advertisement as part of their assignment project. Our first contact was through Blue Clan and a contact was established in the early weeks of the trimester.

In terms of roles, i decided with managing the audio/production aspect of the project whilst Jackson worked at managing public relations with the animation team. We did not have direct influence over the actual advert but we did send them a skeleton track where only the basic synth and drums were available in which they edited the video towards.

The advertisement was for a futuristic smart-phone that spanned 15 and 29 seconds long with a 8 bar intro. This 8 bar intro served as an establishing shot for the phone with the chorus being used to showcase the applications and features.

Planning was rocky to begin with since we did not do a pre-production plan and nailing an idea was rather slow. However we decided to explore deep house as a genre since it filled out the criteria for a futuristic setting. We decided to keep the music itself rather simple due to the sleek and clean design of the ad.The brief asked for an up-tempo feel and so with the 125 bpm tempo we set, this filled the criteria.

Me and Jackson collaborated through the use of Google Drive, and was instrumental in sending each stems and midi to work with. We used different DAW’s for our project with Jackson using Ableton and me using Logic Pro 9. We decided upon the use of the same sample rate of 48kHz to get a uniform setting when transferring files around.

Ive learnt a lot in this task such as scheduling meetings and effectively communicating with other disciplinaries about production terms in both audio and animation. Ive also learnt about the processes of animation such as providing animatics and audio alignment with video as this was all new to me.

Here is the track on its own. 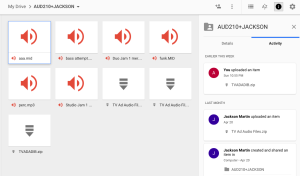 I have here the brief that you needed from us. There isn’t really much to it, we just need audio for 29 seconds like we have spoken about. Details below.

We plan on having an introduction scene of the phone, and then moving into the apps. A little intro before the beat would be good, we will tailor the animation to suit the music as we have still yet to create some of the visual displays for the apps.